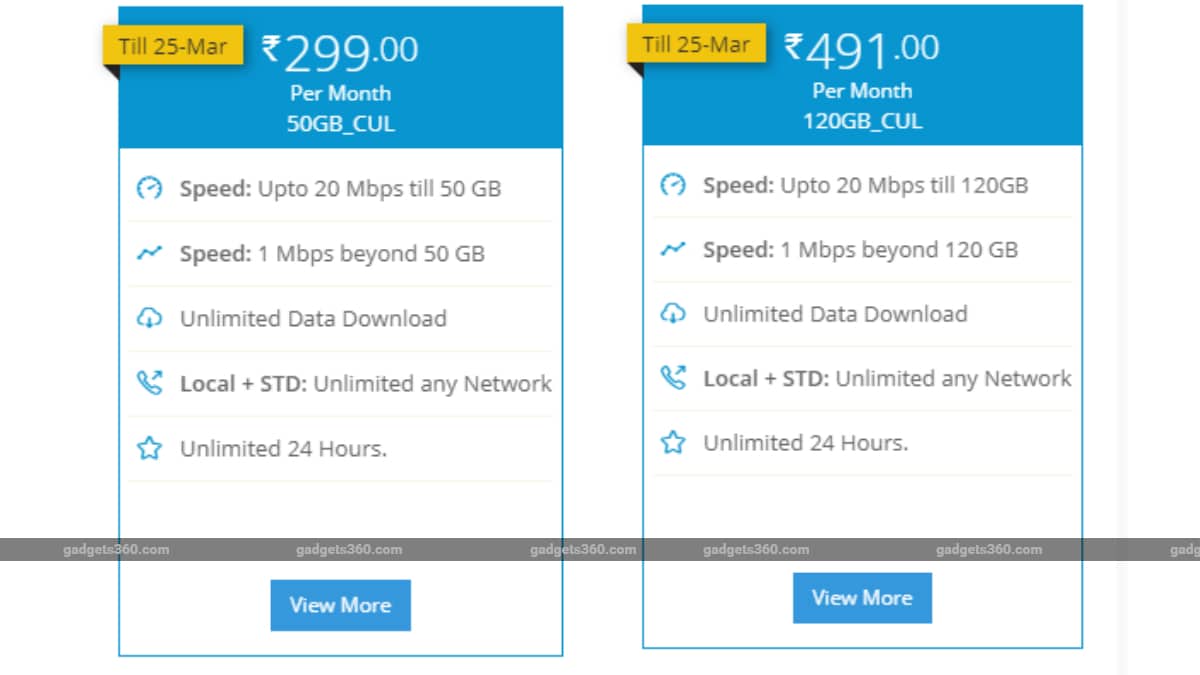 Bharat Sanchar Nigam Limited (BSNL) has launched two new broadband plans priced at Rs. 299 and Rs. 491, and both plans offer 20Mbps data speed. These monthly rental plans have been introduced on a promotional basis, and will be offered until March 25 next year. Apart from offering high Internet speed, the two BSNL broadband plans offer 50GB and 120GB data high-speed data download, respectively. The new broadband plans also offer unlimited voice calls to any network (local and STD) as an added benefit via the BSNL landline service. These two plans are available only to new broadband subscribers, and to BSNL landline customers who are looking to add broadband services.

Starting with the Rs. 299 BSNL broadband plan or the 50GB_CUL plan, it will offer 50GB of free data with up to 20Mbps Internet speed. After the data ceiling limit is reached, the speed will be reduced to 1Mbps. As mentioned, the plan will offer unlimited calling to any network across India (local and STD) for free. ISD rates will be at Rs. 1.2 per unit. BSNL says that it will charge users Rs. 500 as security deposit for the new broadband connection. This promotional Rs. 299 broadband plan is valid for six months, and after that users will be migrated to the 2GB CUL plan that is priced at Rs. 399 per month. The 2GB CUL plan offers 2GB per day data at 8Mbps speeds.

The Rs. 491 BSNL broadband plan also known as the 120GB_CUL plan offers 20Mbps Internet speed, but the data cap goes up to 120GB. After the data limit is reached, the speed is reduced to 1Mbps. Just like the Rs. 299 plan, this one also offers unlimited voice calling benefits, and users will be migrated to the 3GB CUL plans priced at Rs. 499 after six months. The 3GB CUL plan offers 3GB per day data at 8Mbps speeds. We can see the two plans on the BSNL website, but they were first reported by Telecom Talk. The report says that while these two plans are priced on a monthly basis, BSNL is only accepting yearly of half-yearly payment option.